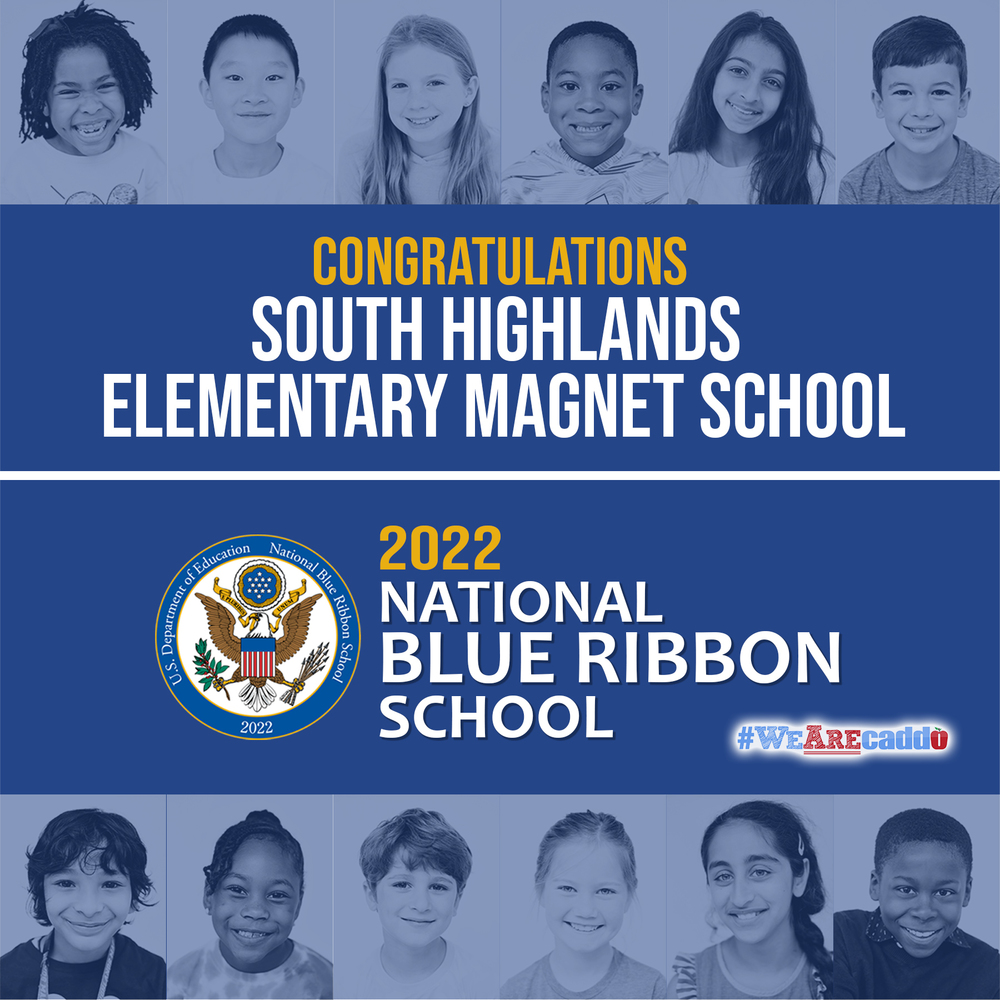 Celebrating its centennial year, South Highlands Elementary Magnet School is entering a new century with a title only it can hold. On Friday, the school was named by the U.S. Department of Education as a 2022 National Blue Ribbon School – making South Highlands the only school in north Louisiana and the first public elementary school in the state to earn the honor three times.

U.S. Secretary of Education Miguel Cardona today announced 297 schools as National Blue Ribbon Schools for 2022. The honor is based on a school’s overall academic performance or progress. South Highlands was recognized for its consistent commitment to excellence as an exemplary high-performing school. Campuses earning this distinction are among Louisiana’s highest performing schools as measured by state assessments.

“There’s no place like South Highlands and it is an overwhelming honor to see that affirmed at the national level,” said Principal Heather Williams. “It has been a commitment of South Highlands since its founding to build up each child across subjects and interests to be confident critical thinkers. The legacy of South Highlands is one of excellence and tradition but also one of continuing to raise the bar to provide more opportunities for our students.”

South Highlands is a performing arts and academic magnet school serving approximately 500 students in kindergarten through fifth grade. South Highlands is a Louisiana arts-integration model school and the first school in the nation that has been designated as the George Rodrigue Arts Integration Lab School. This approach to teaching allows students the opportunity to construct and demonstrate understanding through an art form. Students engage in a creative process that connects an art form and another subject area and meets evolving objectives in both.

The results speak for themselves with 14 South Highlands students since 2015 going on to earn perfect scores on the ACT and alumni attending some of the nation’s top universities including Harvard University, Yale University, the University of Virginia and Rice University.

“South Highlands is not only a school committed to academic excellence but a school that actively seeks to be a part of the community,” said T. Lamar Goree, Superintendent of Caddo Schools. “Congratulations to the teachers, staff, students and families who make South Highlands such a special place and made today’s announcement possible. This honor is shared by every stakeholder who has placed a role in the success of South Highlands Elementary Magnet.”

“I applaud all the honorees for the 2022 National Blue Ribbon Schools Award for creating vibrant, welcoming, and affirming school communities where students can learn, grow, reach their potential, and achieve their dreams,” said U.S. Secretary of Education Miguel Cardona. “As our country continues to recover from the pandemic, we know that our future will only be as strong as the education we provide to all of our children. Blue Ribbon Schools have gone above and beyond to keep students healthy and safe while meeting their academic, social, emotional, and mental health needs. These schools show what is possible to make an enduring, positive difference in students’ lives.”